Throughout history, culture/tradition has been invoked to justify abhorrent and inhumane practices. Tradition encompasses the most enduring enemies of women's dignity and safety and aims to preserve male dominance and female subjugation. In industrialised societies, it can manifest itself in misogynistic music, sexual harassment and social pressure. In many developing countries, violent practices such as wife beating, honour killing, widow burning, female genital mutilation, preference for male children are recognised as traditions and strongly defended.

FGM is one of the harmful traditional practices widely practiced in at least 28 African countries, in parts of the Middle East, in some communities in Australia, in the Far East and among immigrants originating from FGM practising populations in Europe and America. The FGM operation, painful in itself, has immediate and long-term consequences for the health and psyche of women and girls. Despite all the negative consequences of FGM, at least 2 million babies, girls and women undergo the operation every year (that's about 6,000 per day, or one every 15 seconds).

The questions we need to ask ourselves: Why is FGM persistently practiced? Why is it strongly defended in areas where it is practiced and even expanded into new areas? What motivates parents to force babies as young as 7 or 8 days, toddlers and girls, mostly under the age of 10, to undergo FGM surgery? And how can FGM be stopped?

The experience of a young woman from Sudan!

I was infibulated for the first time when I was 5. I can still remember every detail - the terrible pain and how I lay tied up for a few weeks. It hurt so much, I just cried and cried. I couldn't understand why this was done to me.

When I was almost 12, my aunts examined me one day. They found that I was not closed enough. So they took me to the midwife who lived a few streets away. When I realized where they were taking me, I tried to run away; but they held me down and dragged me to the midwife's house. I screamed for help and tried to free myself; but I was not strong enough.

They pressed me down and covered my mouth with a cloth so I could not scream. Then the midwife cut me open again; and this time the woman who operated on me made sure I was really closed up.

They carried me home. The pain was terrible. My legs were tied together and I couldn't move. I couldn't urinate and my stomach got all swollen. One second I was hot all over, the next I had a chill. It was just dry season with sandstorms and it was difficult to breathe. I don't know how many days I lay there. Then the midwife came again. I screamed as loud as I could because I thought she was going to cut me open again. Then I lost consciousness.

I woke up in a ward of the hospital surrounded by moaning women. I was terrified and didn't know where I was. I was still in a lot of pain; my legs and genitals were hugely swollen and my whole body ached.

Later I was told that the infibulation was cut open to let the urine and pus out. I was too weak even to cry; I had become indifferent to everything. I wanted to die. Why did my mother do this to me? What did I do to be hurt like this?

It has been years since then. The doctors told me that because of the infection, which still causes me pain, I can never have children. That is why no one will marry me; no one wants a woman who cannot have children. I don't want to get married either, because I'm afraid it will hurt again. I sit at home and cry a lot. When I look at my mother and my aunt, I ask, "Why did you do this terrible thing to me?" (Source: Fran P. Hosken, STOP Female Genital Mutilation - Women Speak, WIN, 1995)

WITH YOUR HELP WE CAN STOP FGM IN THE LONG RUN!

The consequences can be grouped into short- and long-term. The former manifests itself within a very short period beginning in minutes of the operation, such as bleeding and pain. 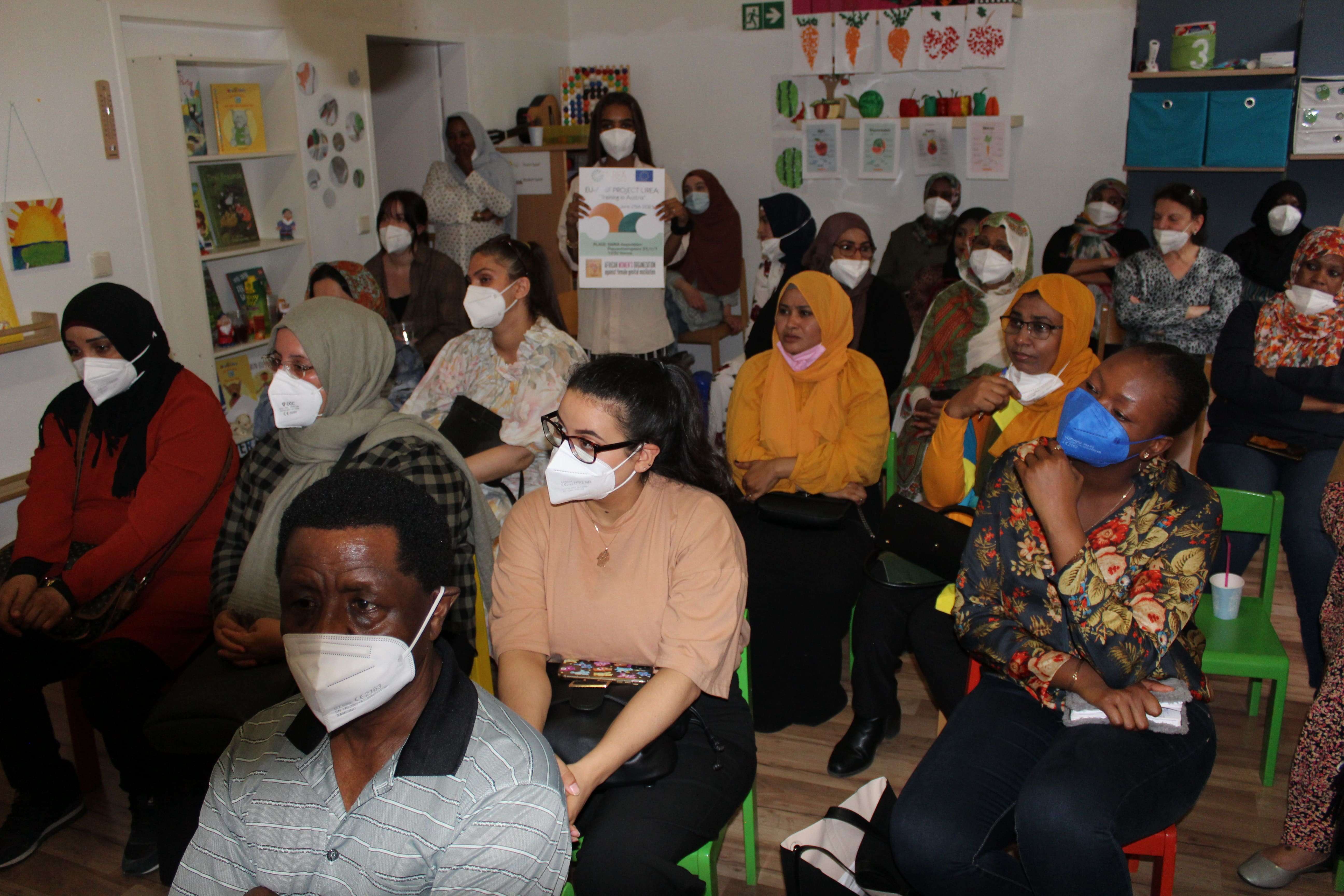 WITH YOUR HELP WE CAN STOP FGM IN THE LONG RUN!

Please help us to end the indescribable suffering!

Reconnaissance & networking in the fight against FGM

In the past, FGM was a taboo subject in the African community and not publicly known in Austria.
Through our many years of continuous awareness-raising campaigns, events, studies, research, projects and publications on the problem of FGM, we have made a major contribution to raising public awareness in Austria and internationally. Furthermore, we have increased awareness of the issue in the African communities and achieved networking among the organisations involved.

By raising awareness, educating and informing about FGM and the health consequences resulting from FGM through public events and information campaigns, as well as trainings for multipliers to prevent this practice - we can stop FGM in the long run!

There is still a lot to do!

It takes a lot of effort to make people aware of this issue. Events are time-consuming and cost a lot of time and money.

With your help, these events can continue to take place - until this torture of women finally "disappears".